One big reason why Buzzfeed might never win a Pulitzer prize.

The NSA revelations, and Africa’s courageous reporters, make it clear that the toughest journalism won’t work as a list or a gallery.
By Peter Preston 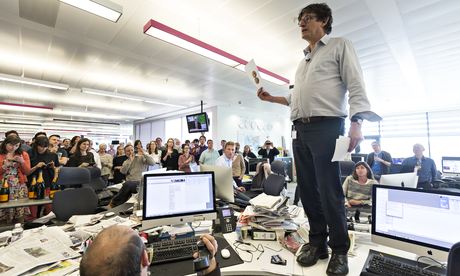 Editor Alan Rusbridger addresses staff in the newsroom after the Guardian won a Pulitzer prize for its Snowden coverage. Photograph: David Levene for the Guardian

Here’s a counterintuitive moment. Far away in New York they’re announcing this year’s Pulitzer prizes. Score a big one for the Guardian,Washington Post and Edward Snowden. But I’m in Cape Town at the International Press Institute’s annual congress listening to Mae Azango from Liberia, wry and utterly fearless, talk about her long, dangerous and ultimately triumphant campaign against female genital mutilation. There’s a link: Mae has a Pulitzer Centre on Crisis Reporting award in her trophy cabinet. There is also a world of difference.

Few of the correspondents and editors gathered here have a tenth of the resources of the Post or the Guardian. They don’t aspire (in the words of Fox’s media commentator) “to transform the global debate over surveillance”. But they also do brilliant, fearless work.

Up alongside Mae Azango on one panel you can find an undercover reporter from Ghana, face hidden behind a floppy mask, who’s made exposing dodgy food companies, crooks and human traffickers his life’s work. He sits with two colleagues – from Angola and Sierra Leone – who’ve faced a torrent of brutal threats. They know all about being arrested and beaten up. They have feared for their lives. They are in a very rough trade. Mae herself had to go into hiding when the mutilation argument turned menacing. Her boss on the little paper she works for spent three weeks in jail for his pains.

In a sense, of course, there’s nothing remarkable about any of this. We know Africa is a perilous place for journalists. Think of the five – one a young woman with breast cancer – rotting in an Ethiopian prison. Think of the two dozen Somali journalists killed in action since 2012. Time after time, you start a conversation with somebody you’ve not met before, and find that they have a horror story to tell. Different from their brothers and sisters in Latin America, Pakistan, Syria, the Balkans, Ukraine? Not really. The moving finger of risk and retribution never stops.

And Cape Town provides another dimension to the racketing debate over the fate of journalism, with all its excitement about digital newcomers (Vice, Vox, Buzzfeed et al) who seem to be the future – while dowdy old papers and beleaguered TV stations are the past. Of course one brave blogger can work wonders. Of course – in Africa – the mobile phone is often the truth weapon of first resort. Those winds of change continue to blow. But to expose corruption, to root it out, you need critical media mass, resources in print and online, good legal advice, friends who will rally round. You need some kind of organisation, and others in the game to pick up what you reveal and run with it. Which is a problem we haven’t solved yet.

Vox, with its one-step-back explanatory features, is the current wunderkind of the web: everything you need to know about Obamacare/Passover/the minimum wage. Vice, with its eclectic assortment of features, guarantees a good dinner-party conversation – and makes money in the process. Buzzfeed divides a world of news into zippy segments, lists, alluring questions. “What is it really like to work in a brothel?“. “Fourteen creepy pictures of an abandoned ski resort that looks like the Shining hotel“. This is news, or sort-of news, with an angle; news with a twist.

Will Buzzfeed – currently expanding its worldwide coverage under aforeign editor, Miriam Elder, hired from the Guardian – become a full-service news operation in the end? It will certainly add staff and costs, and have to take more advertising. But, in an interview with journalism.co.uk, the tone of another ex-Guardian hand, Paul Hamilos, as he takes the job as Elder’s deputy is indicative:

“The old-fashioned version of sending a reporter in for five days with a notepad and bringing back two stories has a place, but it’s not what the future of journalism looks like. The future is much more engaged with people on the ground, bringing in things that are representative of local audiences.

“You’re not going to grow a news organisation if you only think of your English-language readers in your home country. You’re going to grow it by knowing your audience in the place that you’re writing about.”

Note the stress on citizen journalists, engagement, growth. All fair enough as Buzzfeed expands. But how does that work for a courageous local reporter reaching out to save Liberian girls from mutilation? Who does the day job of digging out facts about your local African president or mayor? Stories entitled “54 Nasty Things You Ought to Know about Malawi Construction Contracts” don’t exactly hit the spot. Investigation is often a one-country issue. It can feature cast lists – say, Liberian grannies who believe in FGM – that don’t exactly ring Google’s bells.

In short, there’s nothing wrong with angles, twists, listicles. If they encourage readers, that’s great. If they make money, that’s great too. But they are not salvation for battling reporters in the depths of Africa, doing stories that matter to them and their communities. Nor – in Pulitzer world – can you see the big prize going to “45 Facts About National Surveillance You Didn’t Realise Earlier”. That’s putting the angle before the story, insisting on being offbeat and straying off-beam.

The Washington Post and the Guardian won last week because they are both serious, seriously resourced, newsgatherers, led from the top by people who care about news for its own sake (and not because it’s trending this way or that). Marty Baron, the top man at the Post, “didn’t know me from Adam when I came to him with a really high-risk story”,said Barton Gellman, the first correspondent on the Post’s Snowden beat. Baron “made every decision with guts and good judgment. It made me feel like it was still the Washington Post I’d grown up with”.

And in just the same way I feel that about the Guardian today – as I do for Mae Azango and her friends. Some journalism – journalism that reveals, challenges, maybe changes the world a little – belongs in a proper newsroom. It can’t all be pushed off to foundation-funded units. Nor can it flourish as a discrete operation on the net. It has to involve guts and good judgment – plus the resilience to keep plugging away. It has to make waves right across the media. And we haven’t thought of 45 ways that can happen yet.